skip to main | skip to sidebar

He cut quite a charismatic figure, even in those days.

Al Capone bounded up the steps of Miami's federal courthouse. Flashbulbs popped. Reporters shouted questions. By-standers reached out to pat his broad back--"I touched him!" one of them shouted.

When a reporter for the Miami Herald asked Capone for a statement, Al took the enormous, freshly-lit cigar out of his mouth as if to speak. Suddenly, Abe Teitlebaum, Capone's Chicago attorney, stepped between his client and the pressing mob.

It was 9:30am on Feb. 17, 1941. No one knew it at the time, but this would mark the last-ever public appearance by the legendary former king of American crime.

Capone had spent most of the previous decade in federal prison, serving eight years of a ten-year sentence for tax evasion. Released in November of 1939, Capone retired to his walled-in 14-room estate in estate in Dade County's Palm Isle on Biscayne Bay.

Now he was back in court to answer questions regarding his ability to pay $200,000 in back taxes.

Ever since Capone's release from prison, rumors began to circulate about Capone's declining physical and mental state. "He's nutty as a fruitcake," one of his former cronies reported.

No wonder crowds began to gather that crisp February morning in Miami, many arriving over an hour in advance of Capone's court appointment.

If Capone was hoping to keep a low profile, he failed miserably. He arrived in a double-breasted navy pin-stripe suit, white shirt, floral-print tie that--according to the Herald--"was so loud it screamed," dark sunglasses, and two-toned shoes polished to a blinding sheen. The outfit was topped by a hard, white straw hat. Al looked every bit the fashionable Roaring Twenties gangster.

Trouble was, of course, it was 1941, and Capone's get-up looked positively cartoonish. But who was going to tell him?

Certainly not the blokes Capone brought with him. In his heyday, of course, Capone traveled with at least a dozen armed henchmen. These days, Capone's only companion, other than Teitlebaum, was his brother, Ralph "Bottles" Capone, a low-level syndicate operative.

Capone's closed-door hearing lasted 45 minutes. When it ended, Capone sprinted down the courthouse steps and into his getaway vehicle--an elongated, expensive, maroon-colored sedan. Ralph stayed behind and arranged to pay his brother's tax debt.

According to the next day's Herald, Capone "answered all questions promptly, with reasonable intelligence, and without assistance," a performance that "refuted all stories which have pictured him as a doddering old wreck who sits behind the walls of his mansion cutting out paper dolls."

In truth, Capone was indeed seriously ill with a nervous-system disorder, despite the front he'd managed to stage for his final public appearance.

As his disease progressed, Capone's body and mind retreated into a prison of its own making. His last days were spent in a wheelchair at the end of his dock feeding breadcrumbs to minnows.

Capone, 48, suffered a stroke on Tuesday, Jan. 21, 1947, and died four days later. The body was brought to a Miami Beach funeral home. There was speculation that Capone would be buried in Miami, near the retreat he liked to refer to as, "My sunny Italy of the New World."

But at 3 a.m. on Friday, Jan. 31, on orders from Ralph, the inexpensive sheet-bronze coffin was loaded into a hearse bound for Chicago. Funeral services were held there on Feb. 4, where the mortal remains of Al Capone were laid to rest in 4-degree temperatures that numbed mourners to the bone.


* * *
Capone in the Florida Panhandle...
Mention the name Al Capone and the image springs to mind: Scar-faced czar of the underworld, boss of bootleggers and gamblers, mastermind of the bloody St. Valentine's Day Massacre.
And the city those images conjur?
Chicago, of course.
You might be surprised to know that by the late 1920s, Capone--at the height of his power--considered Florida his adopted home, returning to the Windy City only when pressing business beckoned.
And it was in Florida--at his beloved mansion on Palm Isle on Biscayne Bay--that Capone breathed his last, in 1947 at the age of 48.
If Capone's Chicago legacy was one of murder and vice, his Florida visits contained no such salaciousness. To Al, Florida represented a welcome respite from smuggling whiskey and filling rivals full of lead. Florida, Capone told the Miami News, was "the garden of America...where life is good and abundant, (and) happiness is to be had by all."
In the 1930s, in fact, Capone, made frequent jaunts to the Florida Panhandle.
"One of Al's favorite recreation spots was Grayton Beach," recalled Frank Pericola, Editor Emeritus of the Panama City News Herald. Another Capone retreat was the Valpariso Inn just north of Ft. Walton Beach. "Capone liked luxury," Pericola said, "and he got it at the Valpariso Inn, which was quite a showplace."
While here, ol' Scarface towed the line. "I don't think he even pulled up any sea oats," Pericola remembered. "The last thing Al wanted was attention."
--Ken Brooks
Yesterday in Florida magazine, Issue 14
Posted by TGB at 2:21 PM 0 comments 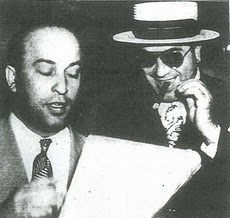 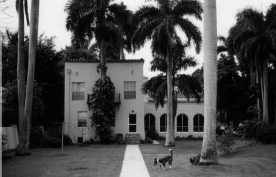 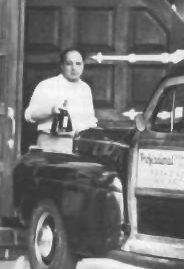 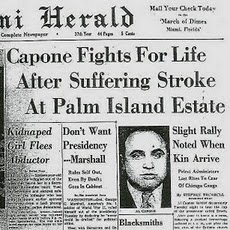 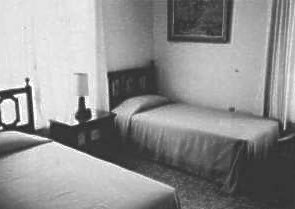 The Capone home today. It sold in recent years for $6.1 million dollars (in "As Is" condition). 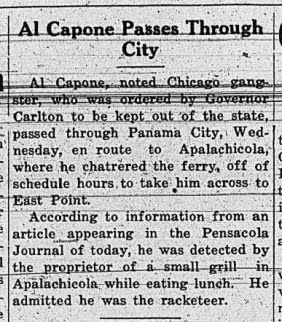